Balance is a big term these days. Who’s not for balance. What exactly then, is balance?

When it comes to balance in the makeup of the human body, the mere fact that  one is able to stand on two feet may be proof enough that you have sufficient balance when it comes to negotiating the terra firma in the atmosphere of Gravity.

But, if you look at the general population of humans, you will notice a manifest level of architectural balance and order in the makeup of their bodies that is only a rough approximation of the design potential according the basic Anatomy and basic Physics.

Dr. Ida P. Rolf made this observation, [there is] “a single problem so prominent in their own structure, as well as others, that it has been ignored: they are off balance, they are at war with Gravity.”

This proposition--that the balance in the structural architectural makeup of the body has a deep effect on health and performance—makes plain common sense. But, it is easy to move on from tacit assent and not give it any further thought. That one might want to do something about it gets passed over in the quotidian rush. It does take some doing, however.

Balance is not a static end-point condition. It is a dynamic and living and  evolving process. Like “health” it exists on a continuum. What passes for general health is too often merely the absence of symptoms. This may be usual; but it is most certainly not normal, however often the terms may be interchanged. The correlate to that in the domain of bodily “balance” would be the self-evident fact that one can stand on two feet. Is is minimal, but usual. Consider this question, how much of what passes for old age and decrepitude is attributable to the long term effects of living in an imbalanced body? The science may not be in on that, but we do have a full measure of common sense to draw on for the answer.

Here is a rather exotic image of balance. It is a depiction of Lord Krishna and the Nagas in Vrindiban. It is a complex and rich myth. It plays on many levels. It was chosen it to make the point that there are many signposts on the scale of balance. Plainly, young Krishna can surf with the best of them. Not only keeping his balance, but in command. The image also points to an inner balance that need not be commented on any further. Simply look at the self-evident equipoise, presence, and serenity. Also, contemplate how this is an image of power; real power, from within. 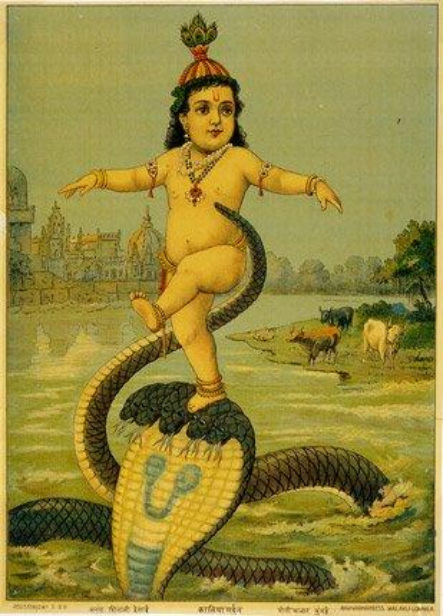